The Many Ways People With Vulvas Can Orgasm

Let’s get one thing clear…

ANY orgasm is a good orgasm.

There’s all this pressure to experience every type of orgasm under the sun, but when it comes down to it… if you’re having orgasms, that’s fabulous! There’s no need to feel shame around what TYPES of orgasms you’re having. There’s enough shame in the world already.

BUT it is kinda amazing how many orgasms we all have access to. And people with vulvas get a few extra bonus orgasms, thrown into the mix.

Though checking some of these off the list may be a fun endeavor, it is by no means a prerequisite to having a fulfilling sex life. So, let’s get better acquainted with some of the orgasmic possibilities that our bodies hold and maybe even try a few out, either solo or with a partner.

Though Freud referred to the clitoral orgasm as an ‘adolescent phenomenon’ and postulated that ONLY vaginal orgasms were a sign of maturity, we’ve since concluded that’s total bullshit. #fuckfreud

Clitoral orgasms are no less satisfying, important or valid than any other orgasm.

Concluding that vaginal orgasms are somehow more mature than clitoral orgasms, because there’s a penis involved, sounds like someone had a bit of an inferiority complex.

Clitoral orgasms are achieved through external stimulation of the clitoris by using a hand, mouth, toy or anything else that feels good. Many people describe clitoral orgasms as building of pleasurable sensation until they reach a plateau (or orgasm).

✨TIP: if you have trouble reaching clitoral orgasms during partnered sex, bring a toy into the bedroom. We suggest the Hitachi Magic Wand.

No matter what you call them, vaginal orgasms have eluded much of the population and have been a source of frustration for many. Even scientists.

The G-Spot was considered a myth for a long time because it didn’t make sense to researchers. The vaginal canal has very few nerve endings (to make childbirth easier), so the idea that enough sensation could be created to induce orgasm was baffling.

Only 25% of people with vaginas can orgasm through vaginal penetration alone. BUT it turns out, there may be less mystery to the vaginal orgasm than we thought.

The clitoris is more than meets the eye. For a long time it was believed that the clitoris only consisted of the tiny nub we see on the surface, but it is actually a complex system that extends internally as well. Meaning that what many believed to be vaginal orgasms could actually be the clitoris being stimulated from the inside, through the wall of the vagina.

Yes it’s true. You can achieve orgasm from literally any part of your body.

Stimulating more sensitive areas such as the ear lobes, nipples or even the inside of the elbow can end in an orgasmic experience.

When the nipples are stimulated, it lights up the genital sensory cortex, the same part of the brain that becomes active during genital stimulation. So there is a significant link between the nipples and genitals.

Some describe nipple orgasms as ‘sneaking up on you’ after extended nipple play. It can feel like a whole body orgasm that ends in an intense release.

Just know that exploring new, sensitive erogenous zones can be fun whether or not orgasm occurs. Shake things up! Find new areas of pleasure! Who knows…you may even discover a new kink.

✨TIP: Use light touch along different areas of your body to explore what feels good to you. You can even use a feather, lotions or other sensory play tools to heighten the experience.

Orgasms are not essential for an enjoyable sexual experience. It’s great when they happen, but they shouldn’t be your main goal. Focus on mutually enjoyed pleasure and relish each part of the journey.

When it comes to orgasms, everyone is different and what gets you there is an extremely individual experience. Some people don’t enjoy certain types of stimulation, but that doesn’t make you any less of a complete and valid sexual being. Find what works for you and hit repeat, as many times as you like. There are so many wonderful ways that people with vulvas can orgasm, but your orgasm is yours to enjoy, in whatever way that floats your sexy, little boat. 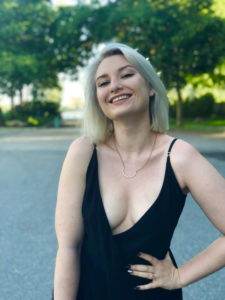 Jennifer Doan is a Confidence Coach, writer and orgasmic activist. She is on a life-long mission  to help feminists own their sexual confidence by amplifying pleasure and giving less fucks. She believes virginity and gender are social constructs, sexuality is as fluid as her iced coffee and that EVERYONE deserves to feel empowered by sex.